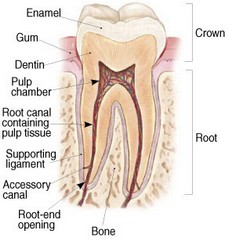 To understand root canal treatment, it helps to understand the anatomy of a tooth and its surroundings. Within the core of every tooth are hollow spaces and channels containing a soft tissue organ called the pulp. The pulp is sometimes referred to as "the nerve". Pulp tissue is largely comprised of blood vessels, nerve endings, and connective tissue. The blood vessels and nerves enter the pulp tissue through tiny openings at the tips of each root. A thin membrane called the "periodontal ligament" surrounds the entire root surface of the roots and connects the tooth to the surrounding jaw bone. 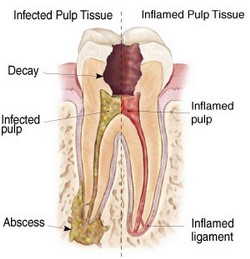 The pulp is a very vulnerable organ and can become irreversibly damaged from deep cavities, cracks, dental restorations, and trauma. Symptoms can range from none to excruciating pain.  Diagnosis may be obvious or elusive requiring careful examination and testing to find the source. Once the pulp is damaged beyond repair, it will inevitably progress through the stages listed below until it is either treated endodontically or extracted. This progression can occur rapidly over hours or may simmer over decades before reaching a tipping point and then progressing through the stages of degeneration.

The symptoms that a patient may experience generally come either from the pulp ("inside the tooth") or from the periodontal ligament or surrounding gums and bone ("outside the tooth"). Even though the pulp is often called "the nerve" of the tooth, it is important to recognize that there are many living cells and nerve endings surrounding the outside of the tooth as well. Hot, cold, and tooth aching pain generally originate from problems within a tooth where as pain to palpation, biting, chewing or tapping on the tooth typically originate when the problems have spread to the outside of the tooth.

In the early stages of pulpal disease, the pulp tissue is inflamed, and sensitivity to cold and / or hot is often the hallmark symptom. The ligament around the tooth may also simultaneously become inflamed causing the tooth to be painful when biting, chewing or tapping on the tooth.

The pulp has a poor ability to defend itself and can easily become irreversibly overwhelmed. Irreversible inflammation causes the pulp to degenerate and progress to necrosis (death) of the pulp. The process of pulpal necrosis often causes spontaneous pain and toothache. It is not uncommon for the source of these aching symptoms to be confusing to the patient as symptoms often "refer" or radiate to adjacent teeth, opposing jaws, or even other areas of the face, head and neck.  As the pulp completely necrosis or dies, it can no longer function and perceive symptoms, and the patient can no linger feel symptoms originating form inside the tooth. As a result of this, patients often experience a relief of thermal sensitivity or spontaneous toothache symptoms leading to a false perception that the problem has gone away.

After the pulp has necrosed, it will eventually become infected. Since the blood supply no longer functions in a necrotic pulp, microorganisms (bacteria) thrive within the confined space, safe from antibiotics and the protective cells of the immune system.

The next stage begins as trapped infection exits the tooth through natural root openings at the root tips and spreads into the surrounding bone and gums. Teeth that have had incomplete or unsuccessful endodontic treatment may also present with signs or symptoms from this stage. Although the ultimate source of the problem lies inside the tooth, the symptoms originate and are perceived from nerve endings outside of the tooth, and occur generally after the inside of the tooth has lost its ability to respond to thermal sensitivity. As infection exits the canals at the root tips, it dissolves the surrounding bone which can often be seen on x-rays or CT scans.  Symptoms may again be none, but commonly include palpation tenderness, and varying degrees of sensitivity to biting and / or swelling.  An infection at this stage may be referred to as an "abscess" though it is not truly an abscess if the infection is dormant or "sleeping".  A dormant infection can rapidly "wake up" and convert to a more active  / pus forming abscess which often involves significant pain and swelling of the tissues of the mouth, face, or neck. Sometimes the abscess expands and burrows through the bone to the surface, forming bump or pimple in the gums. This allows the infection to drain from the tooth, through the bone, and into the mouth and may have a foul taste. Symptoms often become minimal when an abscess is draining through such a bump which is sometimes called a "fistula" or "sinus tract".

Once this process starts, there are only 2 ways to eliminate the diseased pulp; 1 - extraction and 2 - endodontic (root canal) treatment. Leaving the area alone is an option but is not a healthy option as the area is likely to become more problematic with time.

Signs and symptoms can range widely.

Referred pain is common with an inflamed pulp and patients complain of multiple problems even when it is from a single tooth.

The above stages can overlap when a tooth has multiple roots.

X-rays and CT scans are unremarkable for teeth that are in the early stages of endodontic disease.

Antibiotics can not cure a tooth from endodontic disease but may be helpful as a temporary solution. Only extraction or endodontic treatment can definitively eliminate the source of the problem.

An endodontically treated tooth is not a dead tooth.  The many living cells and nerve endings around the tooth still have the ability to sense biting and palpation pressure.

Because signs and symptoms can quickly worsen, it is best to have endodontic treatment as early as possible once a diagnosis has been made and treatment is indicated. As long as a tooth has a reasonable amount of remaining structure and is well attached to the jaw, it can typically be saved regardless of the above stage or the severity of the symptoms.